Today on the blog I'm looking at the second edition of Saga, a game from Studio Tomahawk. Originally a game set in the age of the Viking, the original sprouted expansions for the crusades and also a more fantasy setting.

I first came across Saga at the Salute gaming Convention some years a go when it has just been released and really enjoyed the demo game I had. This is where I also found my warband of choice, the Skraeling, who in in miniature form look very much like Native Americans (apologies if this isn't the current PC way of describing them, its like a minefield out there sometimes) 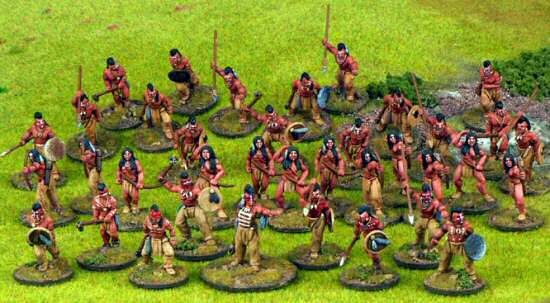 Saga, and Saga v2 have a unique way of creating and managing your warband. When assembling your troops you agree a chosen points level with your opponent, like in most games, and then select your units. We ususally play six points.
You get your Warlord for free, but after that you can spend one point on either; four Hearthguard who are the elites of your force, eight Warriors, or 12 Levies, the less experienced members of your warband. Once they hit the battlefield, you can field your units in any size of between four and twelve figures, so you could buy three units of Hearthguard, and field them as two units of six.

Once on the battlefield, Saga introduces a unique way of controlling your troops. With Saga Dice. Each dice has three symbols on them, one is shown three time, another twice and the final one just the once. Before each turn you roll one dice for each unit on yours the table, as long as they have enough models remaining, 4 in the case of warriors for example, and then use the result of this roll to perform actions in yours and your opponents turns.

Each force also has a battle board which provides them with the ability to activate units to move, shoot or charge, as well as some faction specific abilities which is where the different types of warbands available really comes in to its own.

The Skraeling board shown above is slightly different to the other boards as it does not require specific symbols to activate units, but rather different combinations of similar or different dice results, but it should still give you an idea of how the boards work.
If you want to activate a unit of warriors, you would place one of your previously rolled Saga dice in the top left of the board. If you wanted to activate a unit of Levies, you would put two dice with identical results on the section of the board to the right of the warrior activation field.
As I said each board has different combinations of results to do different things, but they are all set out in a similar way. Basic activations at the top, which can be done multiple times in a turn, and the more involving ones in the lower portion that can only be done once per turn.

Once you have placed your dice, you then remove them to do the activation shown in the section where you positioned your dice, until you have done all the activations you wanted to do that turn. Some of the fields allow you to react to things your opponent has done in their turn, such as interrupt a move with some shooting for example. These dice don't get removed until your opponents actions trigger them. Another unique mechanic is fatigue. This is represented by tokens placed next to units after certain actions and has an effect on their ability to act. The usual way to gain fatigue is to be activated more than once in a turn, or by fighting in combat.
Once you have fatigue, this can be used by your opponent to either slow you down, make your armour worse, make their armour better or if you have too much fatigue stop you doing an activation all together. It's a really interesting tactical decision in the game deciding whether you activate a unit again to try and kill the enemy warlord, knowing that another point of fatigue will mean they will suffer in the next turn if your opponent gets a charge in.
If you hit three fatigue at any time, you need to spend your first activation resting to remove tokens, otherwise you cannot do anything that turn.

I wont go into the details of the rules, you can pick these up for £10 and read them yourself, and with the rules now not being specific to any era, you can easily just use some of your existing range to give the game a go, and then buy a specific warband if it turns out to be a game for you.
I really enjoy it as it is a pleasant change from Warhammer and Warhammer 40,000 as it really doesn't share much in the way of mechanics so gives me a new tactical challenge at my games club.

My next blog post will be a battle report from a recent game I had with my Skraeling against the Welsh.

Social media & sharing icons powered by UltimatelySocial
We use cookies to ensure that we give you the best experience on our website. If you continue to use this site we will assume that you are happy with it.OkNoRead more